Battlefield Memorial Park and the Siege of Savannah 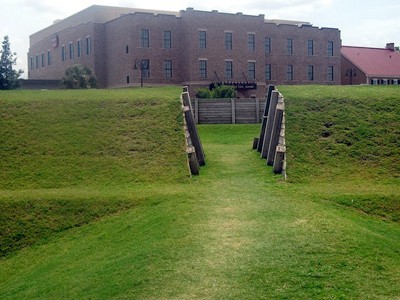 Battlefield Memorial Park, located in Savannah’s historic district, is one of the few places in the continental U.S. that you can visit where literally hundreds of heroic men died in a single battle to protect your freedom from a foreign invader.

In the autumn of 1779, during the Revolutionary war, Savannah was in the hands of the British, who had captured it the year before from an unprepared city militia and Continental army. On the morning of October 9, 1779, the continental army, led by French Admiral Comte d’Estaing, launched a direct assault on the British defenses in an attempt to win the city back.

Inside Savannah’s defenses, the Spring Hill Redoubt, were about 2,500 British defenders who had withstood an almost month-long siege. They were now facing an allied French and American force of 5,500 troops. It was a surprisingly international battle, with soldiers from Scotland, Ireland, Sweden, Poland, Germany, and even 500 Haitian volunteers taking part in the fighting on both sides.

8,000 soldiers from three different armies clashed for the control of Savannah but, when the smoke cleared, the city remained in British hands and more than 800 troops were dead or wounded. The battle was one of the bloodiest of the war.

In 2003, the City of Savannah purchased the unmarked battlefield from the Norfolk Southern Railway and, a couple of years later, archaeologists from the Coastal Heritage Society located evidence of the central area of fighting: the Spring Hill Redoubt. The dig yielded tell-tale parts of guns, musket balls, and even evidence of the redoubt’s trench.

You can now visit the restored site, Battlefield Memorial Park, and walk the ground where hundreds fought and died for our national freedom.