If your family was anything like mine, road trips meant stopping at nearly every one of those ‘historical markers’ along the way to read about a battle or a land migration. While it seemed tedious at times as an eight-year-old, it nurtured in me a love and appreciation of history.

So, if you are a history buff like me or simply a patriot, you may be interested in learning about the city of Savannah’s role in our nation’s Civil War. Savannah, the city that Union General William Sherman said was “too beautiful to burn” on his March to Sea. Here is some information on upcoming Civil War tours:

This Civil War 150th commemorative tour explores the Low Country panorama of Civil War sites. Accompanied by guide Chase Anderson, whom is also quite a talented harmonica player, the tour retraces Robert E. Lee’s days in Savannah as civilian and military man. A wide array of other Civil War sites in and around Savannah are also included on this coach tour, with indoor/outdoor routes and walking tours at: Forts Pulaski, Jackson, and McAllister, the rooms of the 1849 Andrew Low House where General Lee stayed, the inner and outer Civil War defense works of Savannah and the Civil War battlefield preservation movement in Savannah and the Ogeechee Canal. Learn about the importance of the railroads leading in and out of Savannah in 1861. The tour also includes the courtyard of Sherman’s headquarters and the circa 1820 City Hotel, which served as a Confederate hospital in 1863. Live period Civil War music provided for special events. Lunch and dinner Civil War tour packages available, call for pricing: 912.508.1234. 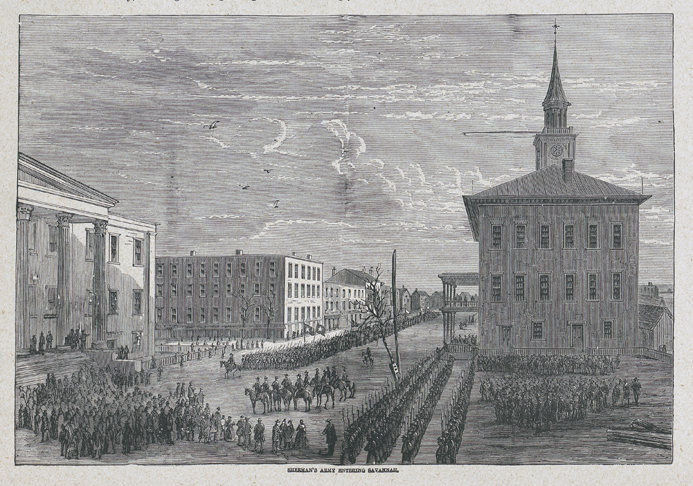 From an antique print Our Soldier in the Civil War, Sherman’s Army entering Savannah, GA

Experience the drama and desperation felt during the last days of the Civil War on the Savannah home front. Visit houses and museums dedicated to Robert E. Lee, the Low family of the Andrew Low House, the historic Old City Hotel, and numerous outdoor sites including Sherman’s headquarters and Factor’s Walk on the River. Tours begin at 10 a.m. daily, last about two hours and cost $35 per person (includes admission into the circa 1849 Andrew Low House). Contact Savannah Cultural Heritage Tours for tickets and more information: 912.508.1234.