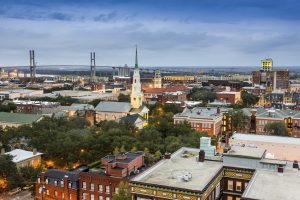 Savannah’s Historic District, one of the largest National Historic Landmark Districts in the United States, is one of the main reasons people give for coming to the country’s loveliest city – but what will you find here that’s so appealing?

Savannah was established in 1733, making it the oldest city in the state of Georgia. Savannah was also Georgia’s first state capital and a strategic port city in both the American Revolution and the Civil War. Add all this together with Savannah’s continued importance as an industrial center and seaport and you know it’s got to have a rich history – and that’s Savannah’s Historic District.

Savannah’s National Historic Landmark District encompasses most of the original plan for the city – now thought of as “downtown.” The four wards – Savannah’s famous Squares – of the initial city plan, the “Oglethorpe Plan,” are found here, as well as most of the twenty that came after.

Well worth visiting, Savannah’s central, open squares, were originally meant as space for military exercises. Now, those remaining are more park-like, often with benches, fountains, a historic monument or two, and more often than not surrounded by equally fascinating and historic buildings.

Of the city’s historic buildings, few are as celebrated and beautiful as the churches in Savannah’s Historic District. Some of the most historic, important, and beautiful churches in the country can be found here: the Cathedral of Saint John the Baptist, the First Baptist Church, Christ Church, Saint Philip AME Church, the Masonic Temple, the Unitarian Universalist Church, Wesley Monumental Church, Temple Mickve Israel (the third oldest synagogue in America) and the First Bryan Baptist Church – the longest-operating African American church in the US – to name just a few.

Many of the museums in Savannah’s Historic District are notably historic buildings, themselves: the Owens-Thomas House and Museum, the Isaiah Davenport House Museum, and the birthplace of Juliette Gordon Low, founder of the Girl Scouts of the USA, for example. The Central of Georgia Railway roundhouse complex, the oldest antebellum rail facility in the US, is here, too and definitely worth a visit.

Other worthwhile museums in Savannah’s National Historic Landmark Districts include the Ralph Mark Gilbert Civil Rights Museum, the Telfair Academy of Arts and Sciences, and, of course, The Jepson Center for the Arts, whose modern outlines may seem a touch out of place, here in the middle of historic Savannah.

Beyond all the architecture and museums, the cobblestone streets, lined with those iconic Spanish moss-draped live oaks, continue to host lots of lively and active restaurants, shops, and galleries – and let’s not forget the 30 acres of green space that make up Savannah’s most iconic recreational area, Forsyth Park!

There’s even great lodging in Savannah’s Historic District! McMillan Inn is located in Savannah’s historic district, offering unrivaled quality, convenience, and true Southern hospitality and all within walking distance of everything listed above! Why stay on the outskirts of the city in some stale, cookie-cutter hotel or motel when you can stay in the part of town brought you to Savannah in the first place! Book your Savannah getaway now at McMillan Inn!

Of course, Savannah’s wealth of attractions stretch well beyond her historic district – after all, we’ve not even mentioned Bonaventure Cemetery, Old Fort Jackson, River Street, Fort Pulaski National Monument, or Tybee Island and its historic lighthouse – so what are you waiting for? Come see the beautiful scenery, wide array of classic architecture, and endless strata of history in Savannah’s Historic District.