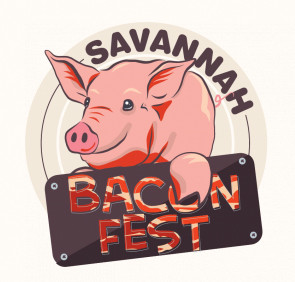 I like bacon, you like bacon – just about everyone likes bacon! Come out to Savannah Bacon Fest 2017 on River Street, September 1st through the 4th, 2017, for live music, arts and crafts, and delicious, mouthwatering, heavenly BACON!

Bacon has always tasted this good so I’m confused as to why it took us this long to so widely celebrate it. Everywhere you look these days, there’s something new with bacon. Bacon wrapped this, bacon shaped that, bacon scented air fresheners, and bacon flavored desserts. It can all seem a bit over the top – but we ARE talking about bacon, after all!

Savannah takes the trend of bacon-appreciation to its logical conclusion with the annual, 4-day Savannah Bacon Fest on River Street. Select local restaurants will be serving a variety of tempting bacon creations. You’ll see bacon, pork belly, sow belly, pork slab, pancetta and more. You’ll also see things you never considered doing with bacon – and you may be surprised at how good it all is! END_OF_DOCUMENT_TOKEN_TO_BE_REPLACED