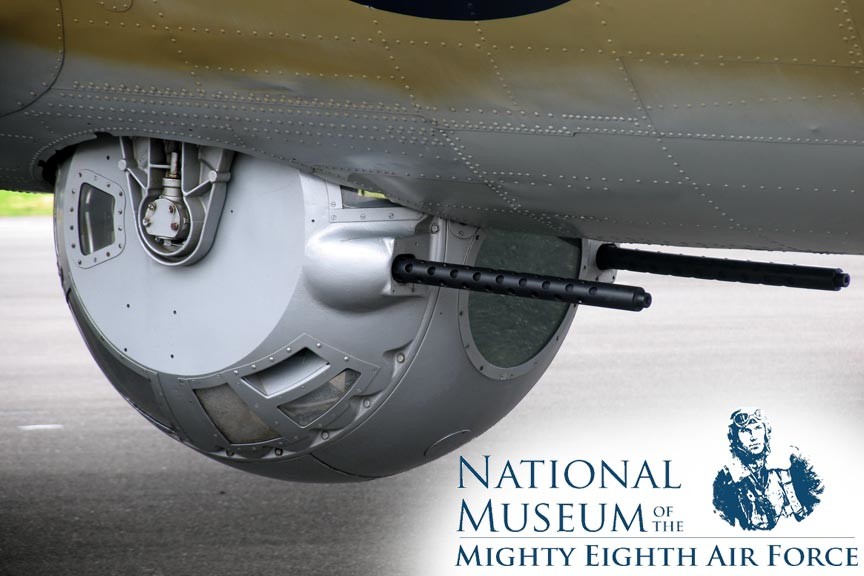 The United States Eighth Air Force Division was activated in Savannah on January 2nd, 1942, 53 days after the attack on Pearl Harbor. One of its first missions was to stop the German war machine, gain control of Europe’s skies, and pave the way for an Allied land invasion.

The Boeing B-17 “Flying Fortress” was the division’s main tool for this task. The runs were done during daylight hours and against heavy anti-aircraft fire and the deadly fighters of the German Luftwaffe. As you can imagine, the odds were terrible. The 8th suffered an estimated 26,000 combat fatalities in WWII – yet still they flew.

This is just the first chapter in the ongoing saga of the Untied States’ Eighth Air Force. Imagine what more you’ll discover with a visit to the Mighty Eighth Air Force Museum.

The National Museum of the Mighty Eighth Air Force is located in Pooler, GA, less than a half-hour’s drive from our Savannah bed and breakfast. Fans of aircraft, history, or the military will find plenty to fascinate them at the museum.

One of the museum’s biggest attractions, both figuratively and literally, is “The City of Savannah,” a restored B-17 bomber. It is named after the 5,000th plane to leave Hunter Army Airfield during WWII and is the only publicly accessible “Flying Fortress” in the world.

Other aircraft on display at the museum include a PT-17 Kaydet, an F-4C Phantom, a MiG-17A, and a B-47 Stratojet. A nose piece from a “Fightin’ Sam” B-24 Liberator is also on display, along with numerous, highly detailed aircraft models.

Another popular attraction is the “Mission Experience” exhibit that visually simulates a WWII bombing mission. Other exhibits focus on WWII Prisoners of War, Tuskeegee Airmen, WASPs, and V-E Day.

The museum’s research center is home to over 10,000 books, diaries, and other historical documents. Outside, the Memorial Garden contains many beautiful memorials arranged around a peaceful, reflective pool.

The National Museum of the Mighty Eighth Air Force

Think of McMillan Inn as your Savannah home away from home. Our 1888, Italianate Revival Inn has twelve luxurious guestrooms and a Carriage House to choose from. Our convenient location in Savannah’s downtown historic district puts you within mere steps of most of Savannah’s best attractions. Book your stay today!