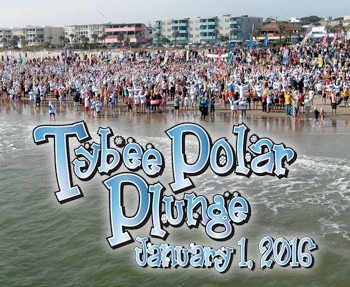 It’s New Year’s Day, you’re in Savannah, and you’re looking for a unique and fun way to celebrate the first day of the New Year. Why not take the plunge – the 2016 Tybee Polar Plunge!

It’s a popular pastime for New Year’s Day, this throwing of one’s self into waters far too frigid to be swam in or otherwise enjoyed. Tybee Island’s Tybee Polar Plunge isn’t the only polar plunge around but, if you’re in Savannah, it’s certainly the most convenient one!

The annual Tybee Polar Plunge is also a very popular Polar Plunge, with crowds and registrants crowding the beach come New year’s Day to such a degree, in fact, that organizers are urging would-be participants to register online prior to the event to keep lines down and the event on schedule!

The annual Tybee Polar Plunge event was initially just a joke among friends – a joke now almost 20 years old and grown big enough to have set a world record in 2012 for the largest gathering of people in swim caps!

Tybee Polar Plunge 2016 promises to be all that and more with the return of the Gang of Goofs Costume Contest and Parade!

Gangs of Goof (?) will queue up for the Gang of Goofs Parade, which passes before the esteemed panel of judges. Here they will compete for prizes, including vacation stays on Tybee, complimentary attractions passes, restaurant gift certificates, free bike rentals, and more.

First place winners in the Gang of Goofs Costume Contest will also receive “Le Gang of Goofs” trophy, which is then engraved with the winning team’s name and displayed at the location of their choice for an entire year.

Whether you’re far too sane to leap into the cold Atlantic surf or not, this is one annual event you won’t want to miss!

Tybee Polar Plunge Lodging
Tybee Island boasts five miles of public beaches, top-rated restaurants, and lively nightclubs. All that’s left is lodging – McMillan Inn! McMillan Inn is located in Savannah’s historic district, less than 30 minutes away from Tybee Island and even closer to all the best attractions and landmarks in historic, downtown Savannah. Enjoy unrivaled quality, convenience, and comfort during your Savannah vacation – McMillan Inn would love to host your stay!